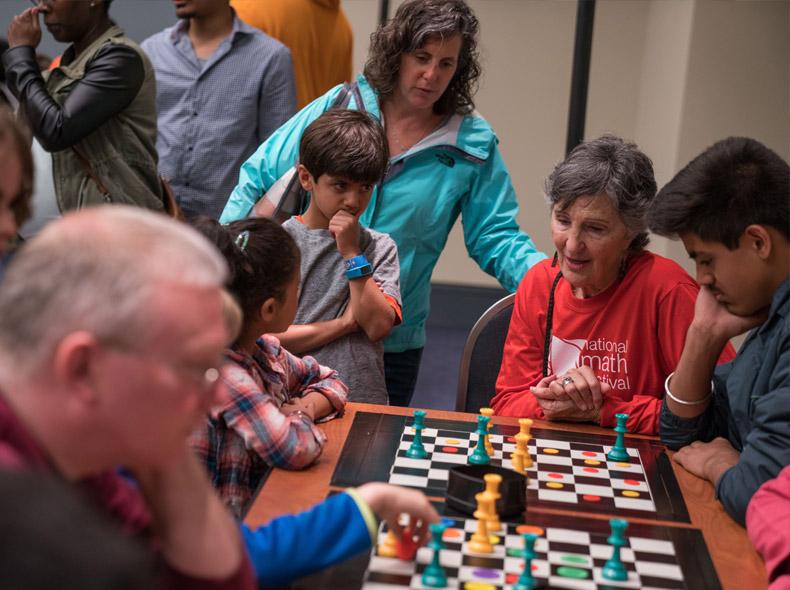 The Julia Robinson Mathematics Festival invites you to celebrate your mind with mathematics. Come see how mathematics can jump off the pages of a book, grow out of a board game, or emerge from a the dialogue of a cartoon. Our mathematics will tickle your mind, and your mind will respond with thoughts you never knew you had – and maybe thoughts that no one else has had!

Students will make multiple units and assemble these units into geometric shapes. The results of the folding will be colorful and beautiful models that students can take home with them.

Play Amazons with the Elwyn and Jennifer Berlekamp Foundation

Come learn and enjoy Amazons, a colorful game of strategy to fascinate the entire family. Try your hand at the Game of Konane, the ancient Hawaiian version of checkers: extremely simple to learn, but infinitely challenging to play.

Use Math to Solve Fun Mechanical Puzzles with Stan Isaacs

Can You Win at Nim? with Math Plus Academy

Nim is a mathematical game of strategy in which two players take turns removing stones from piles. Be the person who takes the last stone and you win. It’s a simple game for mathematicians of all ages to explore.

Find Sets, Build SOMA Cubes, and Get a Taste of Intransitive Skittles with the Math Teachers’ Circle Network

Math Teachers’ Circles are professional communities where teachers get a chance to work on rich mathematics problems together, allowing them to enrich their own mathematical knowledge and bring more problem solving to their students.

How Can You Use Math to Game a Game Show? with Mathematics in Motion

Monty Hall, the host of Let’s Make a Deal, used to give contestants the chance to change their bets in a game show after showing them a hint. Should they or shouldn’t they? We’ll get students to try this out for themselves, think about the Monty Hall paradox, and learn about probabilities.

Learn and Play a Few Beautiful Board Games with Dr. Gord Hamilton of MathPickle

Dr. Gordon Hamilton is a board game and puzzle designer. He founded MathPickle in 2010 to inject new ideas into the classroom. There is nothing he enjoys more than stumping students and having them stump him. Gordon is the designer of the board game Santorini, which launched April 2016 with the largest ever Kickstarter for a strategy game.

Create your own unique artwork and patterns with these colorful tiles and discover beautiful symmetries.

From emperors to AIs, all have struggled to unlock go’s secrets. We’ll provide a hands-on introduction to the game. After you learn the rules, test your wits on our go puzzles!

Sydney Weaver, 21, is a seven-time gold medalist professional Speed Cuber. She loves sharing mathematics with people of all ages typically using the Rubik’s Cube as an interesting medium. She hosts multiple workshops throughout the year in many locations in hopes of spreading math and learning as much as possible.

The Julia Robinson Mathematics Festival will offer take home puzzle booklets and other game-based resources for all ages and levels of challenge!

The Julia Robinson Mathematics Festival has been supporting fun math events for over a decade all over the world. JRMF's mission is to inspire the next generation of problem solvers with joyful, collaborative mathematics. Prior to COVID, JRMF supported hosts in setting up and running in-person math festivals, where students have agency to explore a wide variety of hands-on activities led by... Learn more