The Techie Toy behind the Math Bubbles at Science Centers: What Is Zometool? | National Math Festival Skip to main content

The Techie Toy behind the Math Bubbles at Science Centers: What Is Zometool?

2019 National Math Festival participants at dozens of science museums around the county experienced the fun of geometric bubble blowing using kits created by Zometool. What is Zometool? Zometool (opens new window) is a construction set that allow players to build beautiful and fascinating models from simple to profound. NASA has used Zometool for AIDS virus research in space and for a space station project. These geometric toys were developed to ignite the imaginations of future architects, scientists and engineers.

You can learn more about this versatile math manipulative in this guest blog post, featuring an interview with Carlos Neumann, the Chief Information Officer for Zometool (opens new window), by Kirsten Bohl of the Mathematical Sciences Research Institute (MSRI).

Why do people love Zometool?

For varied reasons. For some, it’s just a nice creative experience families can share in – everybody in the family can build separately, or make things together. For others, such as artists, scientists, and researchers, Zometool helps them model complex phenomena in their field.

What can you learn by playing with Zometool?

Wow—but kids can just play with it and enjoy it, right?

I’ve seen three or four basic patterns. Very young kids tend to build long swords, snakes, lines. Older kids tend to build cubes; these are shapes they know from Minecraft, and they build Minecraft-like objects made out of stacked cubes. A third pattern is kids who want to build something specific – a ship, a horse, something they know. Some are really good at this. One boy built a frog; it was quite lovely. A fourth thing I’ve seen happen is, sometimes older kids start to play, and they come across a pattern. They start to follow the pattern. One time with activity stations set up in a playground, a girl spent 45 minutes building her pattern; it was very complex by the end. After she finished, she took off running without saying a word. 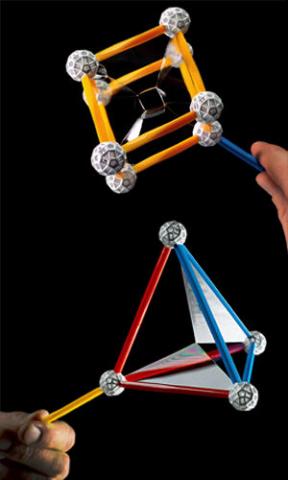 I noticed on your web site you have challenge cards (a free PDF) (opens new window), where kids and adults can try to make the pattern pictured on each card.

Yes. Those are very popular. The only thing is the answers are not included! Most people can build a cube right away. If you give them an octahedron, most people don’t know what that is. Some can build it easily; for others, it’s harder. Once it clicks and they understand how it goes together, it becomes easy for them. Zometool is about finding, recognizing, and creating patterns. You can see the pride in children’s faces when they’ve built something. It’s a creative tool where words can be involved, but they don’t have to be.

Tell me about the “Geometry of Soap Film and Bubbles (opens new window)” resource.

We hired a teacher to make a lesson plan for Grades 5-8. As you know from the Zometool Bubble Workshops at science centers for the National Math Festival, this is a very popular session. We wanted to make it accessible for math teachers, science teachers, and teachers in other fields to experience the joy and creativity of making surprising geometric bubble shapes using Zometool. So we created the resource. I hope your readers will enjoy it! (Download it here (PDF) (opens new window).)

In 17 years working at Zometool, I’ve never had a boring day. I think it’s because we attract a lot of bright, creative people to create with Zometool. I am still learning by exploring with the Zometool kits myself, and I know however long I stay with Zometool and keep playing with them, I will still be discovering new things. Sometimes I wish we could get the word out better. Scientists are not always so savvy when it comes to promotion. This is such a fun line of toys, that are valued by kids and adults alike. We’ve won a lot of awards. But there are still many people who haven’t ever heard of it. They pass by it on the street and gawk. “What is that?” Scientists stumble across us and say, “I’ve been looking for a tool like this!” Some people are really exploring what Zometool can do. I recommend checking out Mike Lawler, a mathematician on Twitter (opens new window). He uses Zometool with his kids, and they post about what they’ve made. For myself, my next area of interest is bringing Zometool to Mexico and Latin America.

Carlos Neumann is the CIO of Zometool.